​Mr Matthews sweet shop the most cutest shop in the world it was on a funny corner right under the railway bridge  jutting out the first building you would see turning down our street. Children's eyes peering through the windows. A dream of hubba bubba candy sticks, tutti fruitis, aniseed balls, peanut toffees, sweet tobacco and of course penny chews even half pence. Then there was a social club with revellers pouring out of an evening lots of wonderful music would chime in our ears from our bedroom windows and the clipaticlop of high heels on the pavement the regular laughter and tears and drama of nightlife. Next came the strange antique shop I did not understand this shop it was a mysterious place that opened very rarely owned by a older kind couple which my mum struck up a friendship.

This is where my mothers obsession for ceramic ornaments must have come from she had a few in our visitors room a man and women in a carriage guilded gold bits as decor and some Wade squirrels and a mouse on show above the mantle piece I would sneak into this room it was the no go area of the house gold curtains with 60's swirly patterns mustard coloured sofa with still the plastic on it for protection the most luxurious carpet with thick pile drawing patterns into it with hands. The fire false bright orange plastic and glass cubed coal that looked like giant cola cubes.
​The wallpaper was of course flowery plastic peacocks and bright vases with glass flowers on them.
Opposite a bus stop and Mr Bennet and his family from Nigeria then us then Mr Gale and family who's daughter Karen was my friend. Then the little old lady with her dog Charlie she was always in the window watching people go to the Asian Halal shop next door. We would be sent to get dad's cigs and milk ...

There was a break in the road one end went towards Eaton Road and the Park the other our route to school the slaughter house that led onto the back of our garden. Further along was the mosque chemist and the football ground ta ta tatata tatatata ta ta!

Food was a big deal as there were so many of us so mum would buy in bulk we always had a sack of potatoes onions rice and flour under the stair cupboard sometimes a crate of apples too. Mum made large pots of curry and dad got to take this in his metal tiffin box to work. Generally we had a lot of vegetables in our garden once dad retired but before that it was a sort of saturday morning ritual of going to the market and mum buying veg in bulk carrying it in overflowing shopping bags via the flyover and subway over the bridge next to the castle in Newport. 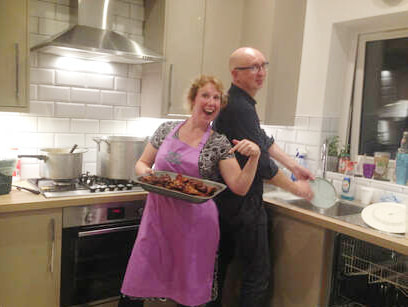 My Wonderful helpers Miss Philips and Mr Stephenson
"Wonderful food made by Nazma Botanica on Wednesday. Delicious and well worth the trip. We will be back!”

All dishes listed in the brief class description are a guide only to the course content; we can make amendments at any time. Courses are Vegan Vegetarian and Gluten Free unless stated in the description. All confirmation of course purchases are sent by email. Please check prior to booking regarding dietary requirements and allergies as these cannot always be accommodated. We are unable to change the class contents to special dietary needs unless booking for a minimum of 10 places. Please inform us at booking if you have any allergies, disabilities, Pregnancy or epilepsy etc. Courses do include, Equipment, Ingredients, Utensils and Aprons and Samples can be taken home please bring along clean dry containers which can be sealed appropriately on the majority of courses unless specified.  Please wear suitable flat shoes, we also recommend that you wear sensible clothing; we are not liable for any damage to clothing or personal belongings All purchases including both gift vouchers and direct course bookings are valid for 3 months from the date of purchase. Amendments to bookings can be made prior to 7 days before the course. Any booking cancelled within the 7 day period cannot be rebooked or refunded and you will lose your booking.  If your booking is booked via a gift voucher you have received we will try our best to find an alternative course for you to attend. Refunds for Gift Vouchers are not available, nor can we exchange gift vouchers for cash. Gift vouchers are transferable, but the 7 day policy will commence once a booking for a course has been made. Should you be unable to attend due to the weather then our refund policy still holds, unless at our discretion we put in place an adverse weather condition policy, which is available from us on request. In the rare occasion we should cancel the course we will try and give you as much notice as possible, at least a week. You will be offered a future alternative course or a full refund. (Where the course attendance is 4 or less this maybe subject to cancellation with as much notice as is possible). We are not liable for any costs that you may incurred.  All courses are different and some will include demo’s and some of the recipes will be made in pairs and some by yourself. We will not pass on any of your contact details. We can accept BACS payments. All Post is posted 2nd class and please allow three working days for any post to arrive, we do not take responsibility for delays in the British postal system.
​https://www.wellbeingswansea.co.uk
Powered by